The Bloodhound (also known as the St. Hubert hound and Sleuth Hound) is a large breed of dog that was bred originally to hunt deer and wild boar, later specifically to track human beings by scent. It is famed for its ability to follow scents hours or even days old over great distances. Its extraordinarily keen nose is combined with a strong and tenacious tracking instinct, producing the ideal scent hound, and it is used by police and law enforcement all over the world to track escaped prisoners, missing people, and even lost pets.

Bloodhounds weigh from 33 to 50 kg (80 to 110 lb), although some individuals can weigh as much as 72 kg (160 lb). They stand 58 to 69 cm (23 to 27 inches) high at the withers. According to the AKC standard of the breed, larger dogs are to be preferred by conformation judges. The acceptable colors for Bloodhounds are black and tan, liver and tan, or red. Bloodhounds possess an unusually large skeletal structure with most of their weight concentrated in their bones, which are very thick for their length. The coat is typical for a scenthound: hard and composed of fur alone, with no admixture of hair. Bloodhounds in a 2004 UK Kennel Club survey had a median longevity of 6.75 years, which makes them one of the shortest-lived of dog breeds. The oldest of the 82 deceased dogs in the survey died at the age of 12.1 years. Bloat took 34% of the animals, making it the most common cause of death and the Bloodhound the breed to lose the most to the condition. The second leading cause of death in the study was cancer, at 27%; this percentage is similar to other breeds, but the median age of death was unusually young (median of about 8 years).

The Bloodhound's physical characteristics account for its ability  to follow a scent trail left several days in the past. Under optimal conditions, a Bloodhound can detect as few as one or two cells. The Bloodhound's nasal chambers (where scents are identified) are larger than those of most other breeds. The large, long pendent ears serve to prevent wind from scattering nearby skin cells while the dog's nose is on the ground; the folds of wrinkled flesh under the lips and neck—called the shawl—serve to catch stray scent particles in the air or on a nearby branch as the Bloodhound is scenting, reinforcing the scent in the dog's memory and nose. The number of olfactory receptor cells are 4 billion in a bloodhound, compared to just 12 million in a human and 100 million in a rabbit. The surface area of the bloodhound olfactory epithelium is 59 sq.in. compared to human's 10 sq.cm.

Pluto, pet of Mickey Mouse
Ol' Red, from the George Jones song
Ladybird from King of the Hill
Broom Dog from Alice in Wonderland I & II
Trusty in Lady and the Tramp I & II
Snuffles in Quick Draw McGraw
Napoleon from The Aristocats 1 & 2
Duke, from the Beverly Hillbillies
Buddy, in Cats & Dogs
Bruno in Cinderella
The Bumpuses' hounds:A Christmas Story
McGruff the Crime Dog
Jasper T. Jowls at Chuck E. Cheese's
Bear & Bryant in Sweet Home Alabama
Sunyer from Oliver and Company I and II
Waylon &Floyd in The Fox and the Hound
Beauregard Jr. in Hee Haw
Tock in 101 Dalmations I & II 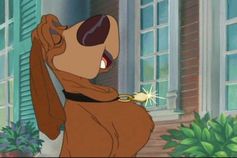 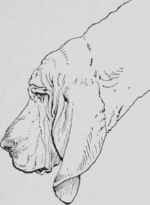 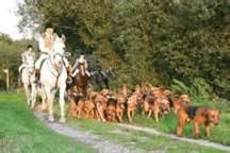